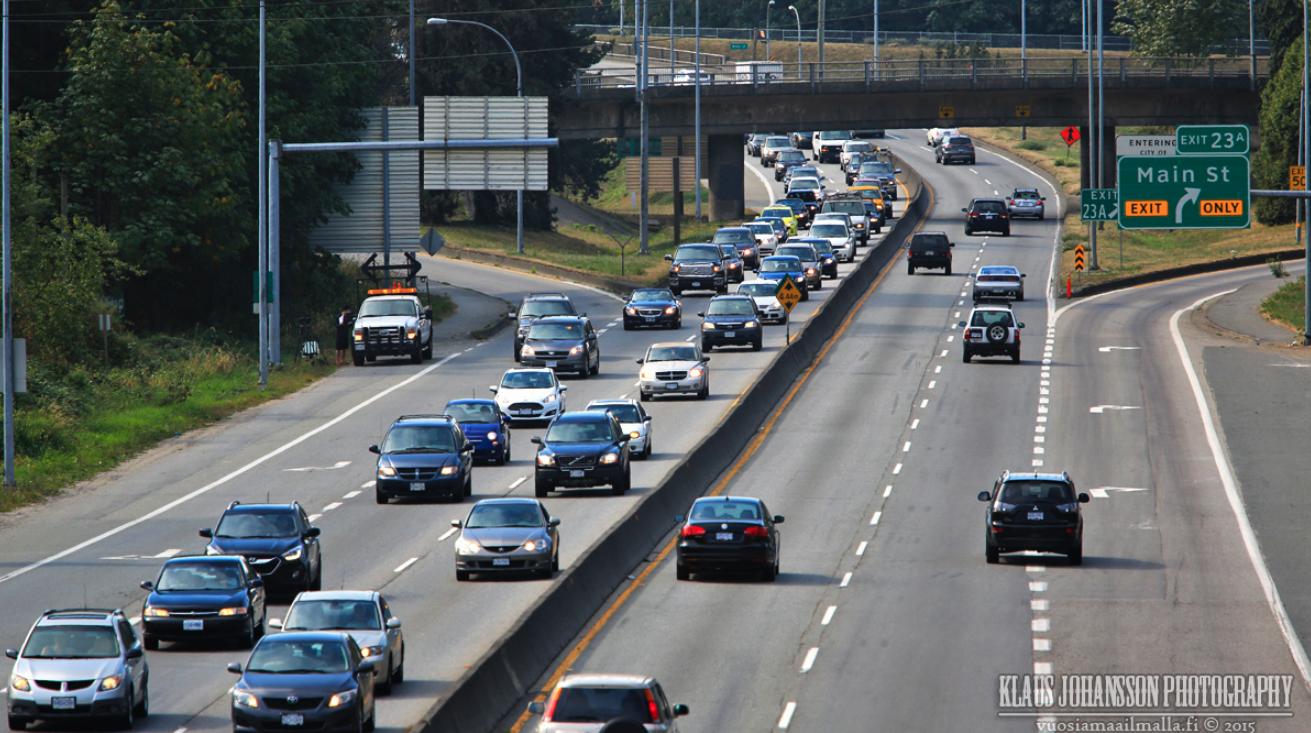 As we all know, the north shore is made up of mountains, valleys, and creeks. The creeks, which run north to south, meaning that east-west traffic must cross bridges. These bridges then become choke points. And of course, there is Burrard Inlet, separating the north shore from the rest of the metropolitan area, making the Ironworkers and Lions Gate bridges major choke points.

2) Workers commuting to the north shore

Because the working class has mostly been priced out of living on the north shore, the bulk of the tradespeople and service industry workers who staff construction projects and businesses here live somewhere else, and must commute here. Most do so by car, because getting from the Fraser Valley to North Van by transit for a 6:30am shift is a non-starter. When they’re finished work at 3pm, the long slog back home begins.

3) Kids getting to activities

As a parent of 2 soccer players who each have 3-5 games/practices a week, I know how much driving is involved to get them where they need to be in the late afternoon and early evening. It’s not uncommon for kids here to do more than one extra-curricular activity that requires transportation, and doing so by foot/bicycle/transit isn’t feasible in most cases.

While weekdays are the worst, the traffic getting on and off the north shore on weekends can be pretty bad on weekends too, especially if the weather is nice. Many people from across the lower mainland want to enjoy the beaches, hiking, skiing, etc that the north shore has to offer.

Problems with the typical proposed solutions

Much of the discussion around how to deal with the north shore’s worsening traffic has been around how to “get people out of their cars.” For the most part, I think this is an unrealistic goal, given 4 the contributing causes mentioned above.

Public transit is pretty good at getting commuters from the suburbs to the downtown core according to predictable schedules. It is not good at getting people from one suburban area to another according to varying schedules. Translink’s rapid bus service has been a welcome addition in recent years (especially with priority lanes and traffic lights for these buses), but I suspect it’s little used by the demographic groups mentioned above in the 4 causes.

Personally, cycling is my preferred mode of transportation, but I realize that most people are reluctant to replace car trips with cycling trips. Safety concerns, poor weather conditions much of the year, and hilly geography are likely reasons for this. The network of safe cycling lanes/paths has helped, but I don’t think it’s reasonable to expect that it will convince a large number of people to do away with private automobiles.

Building major road infrastructure, particularly a third crossing of Burrard Inlet, is another hot topic when it comes to improving transportation. It is necessary, but not sufficient, to solve the north shore’s traffic problems. This is because demand for transportation will continue to increase faster than new bridges, etc, can be built.

What I feel is really needed is a way to manage demand on our roads. For most times during the day or night, our road infrastructure is quite sufficient for the number of motorists that live here. But there are certain demand peaks that cause traffic congestion, and all the pollution and wasted time that come with them. By applying the principle that those who use a public good the most should be the ones who pay for it, we can begin to think about possible solutions to limit peak demand.

In other words, we need to start thinking about road pricing: a mechanism that charges motorists in proportion to their use of the roads. I realize this is not a popular idea, and many people who rightly see themselves as being already heavily taxed (by 3 levels of government) are reluctant to make additional payments for a public good that they already pay for through fuel (and other) taxes. Any implementation of a road pricing scheme would need to go hand in hand with tax reductions elsewhere in order to gain the support of taxpayers.

How could road pricing work? There are some models that track the number of kilometers driven by each vehicle and charge a per km rate. Greater Toronto’s Highway 407 ETR is a privately owned and operated example of this. Oregon is looking to implement road pricing on the interstate highways in and around Portland, though this apparently would be run by the state, not a private entity. Such systems involve tracking individual vehicles, which may raise privacy concerns (particularly for Canadians after the revelation that during Covid, mobile phone carriers provided location data for most of us to the federal government, without users’ knowledge or permission).

The more familiar, and less privacy-invasive, model is that of tolls at locations of traffic congestion. The tolls on the Port Mann and Golden Ears bridges are a good example, as they did help to reduce traffic congestion at those crossings.

The key with this model is getting the pricing right. It needs to be high enough so that a significant number of people will take a moment to consider whether their trip is “worth it” before hopping in the car. It should also not be so high as to discourage lower-income people from using the roads for purposes that benefit them, and society (like traveling to work, or visiting an infirm family member). Pricing should also be scaled based on times of peak demand. So for example, the toll at a Lynn Creek crossing might be $2 at 4pm on a Thursday, but only $0.75 at 6:30pm and zero after 8pm. This would provide an incentive for motorists to shift their trips to times of the day or week with lower demand.

In the big picture, road pricing allows for more rational use of our transportation system. By way of example, let’s imagine that Emily is looking to get from lower Lonsdale to the Canadian Tire on Main St. to do some shopping. She can drive or take the bus. The tank is full of gas, and it’s a short trip, so she doesn’t factor in the cost of fuel, or wear and tear on the vehicle. However, she doesn’t have a monthly bus pass, so the round-trip bus fare will cost her $6.20. This marginal cost is significant enough that she opts to drive, contributing to the traffic congestion that day. If, however, she had to factor in a $2 toll on the way there and a $1 toll on the way back, Emily’s economic calculation on which mode of transportation to use changes significantly.

In this way, road pricing provides incentives for people to consider alternative forms of transportation, because it “levels the playing field” in terms of marginal cost (the cost of 1 additional trip). Our current system of taxation plus “free” use of the roads does not provide these financial incentives. Road pricing would lead people to make more use of public transit, carpooling, ride-sharing services, cycling, etc. It could even create a market niche for new forms of HOV (high occupancy vehicle) transport, such as private bus or mini-bus service. It would also eliminate some trips by car, as those who have the option of working from home decide to forego trips to the office, or families decide to consolidate their trips to the supermarket to 2 per week instead of 4.

Such a system of modest but variable tolls would allow us as individuals and collectively to make more rational transportation decisions that reflect the cost of building and maintaining road infrastructure. It would reduce traffic congestion at times of peak demand and encourage people to seek out alternatives that are better for health and the environment. As long as it can be managed in a way that it does not simply become another revenue stream for government to milk, road pricing could go a long way toward improving the quality of life on the north shore.

Clayton ran for District of North Vancouver Council in 2022. He holds a BA in International Development from Trent University, and works as a project manager in the construction industry.